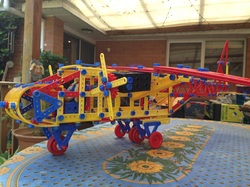 As a child one of my favourite Set C Plastic Meccano models was the cargo plane. I've had in mind for some time to build a bigger aeroplane model and have finally completed it.

This is a Short Take-off and Landing (STOL) transport aircraft of the type that service remote communities where only short landing strips are available.

Although I wasn't copying any specific aircraft this model is very similar to the Short Brothers 360 STOL Cargo Plane.
Built : September 2013