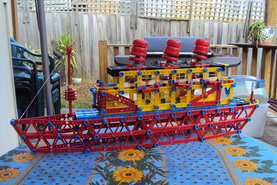 This ship was a built as a tribute to the Titantic on the 100th anniversary of its sinking. Of course true Titantic experts* will immediately spot that my ship does not have four smoke stacks as the Titanic did. I didn't have enough parts to extend the ship enough to add a fourth smoke stack.In fact in the video and some of the photos you will notice that part of the hull was originally made from an assortment of blue triangle and yellow strip parts. I soon replaced these parts with additional red girder sections after I did some more shopping on eBay.


*Of course true Titanic experts will also know that in fact the fourth smoke stack on the Titanic was a dummy added for the sake of appearances only !
Built : May / June 2012