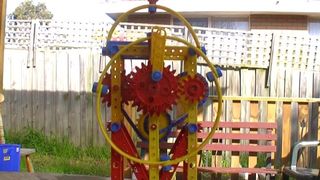 In this model I solved how to get the two hands of a clock to rotate at different speeds whilst on a common axle. Of course the little hand and big hand don't move at the correct relative speeds due to the limitations of Plastic Meccano gears. But I did build it into a nice carriage-clock style case.

Technical Tips
Getting the two hands to turn at different speeds is achieved by driving the small hand directly from the central axle. The big hand meanwhile is fixed to a large gear wheel that is driven by the adjacent small gear wheel. The collet nut on the large gear is removed so the large gear turns independently from the central axle on which it sits.
I have long tried to construct an escapement mechanism but the limitations of Plastic Meccano do seem to be too much.
Built : July 2011