This model of a two span cantilever bridge was inspired by Meccano Magazine's model of the famous Forth Bridge published in January 1922. The Forth Railway Bridge in Scotland is perhaps the most famous bridge of this design, built in 1890. But many bridges around the world have used this principle which allows for long spans and simplified construction. 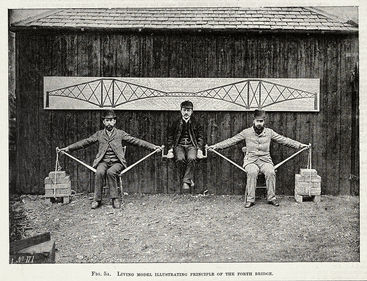 Nothing demonstrates the principle of a cantilever bridge better than this photograph from 1887. It shows the Japanese engineer Kaichi Watanabe supported by Sir John Fowler and Sir Benjamin Baker acting as the cantilevers between the mid-span and the end anchor points. These three men, all prominent engineers of the Victorian Age, were responsible for the construction of the Forth Bridge.