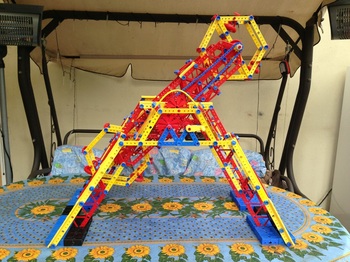 Part of the fun of Meccano is being inspired by other enthusiast's models. And so when I saw Ralph & Sue's Meccano Site with a model of a fairground Skyrider (A double ferris wheel) I thought it would be fun to re-create it in Plastic Meccano.

Technical Tips
Quite a few technical challenges to overcome in this model. First it is necessary to find a way to stop the large chain wheels at the centre from rotating. So I removed the collet nuts, interlocked them with a medium sized gear wheel which itself has a bolt acting as an anchor against the frame. As the large rotor arm turns the chain rotates around the chain wheel and this motion drives the outer ferris wheels.
The large rotor arm itself is turned by the large gear wheels inside having a bolt engaged with the girder frame. The worm gear is there to join together two separate axles. The bevel gears within the outer ferris wheels serve a similar purpose.