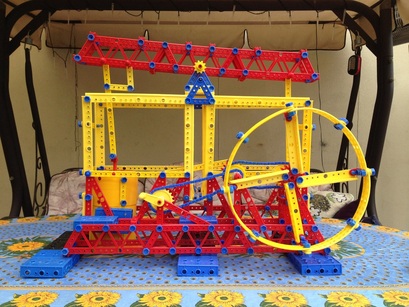 In this model I've tried to represent the main parts of the famous Boulton & Watt beam engines that powered the Industrial Revolution in the early 19th century. These engines were massive but produced less power than a small modern-day car engine.

In this model you can see the large drive cylinder, the beam connected via a crank to the large fly wheel and a mechanism to operate the valves that control steam entering into each end of the cylinder (In this double-acting engine steam pushes the piston alternately in each direction greatly improving efficiency).
Built : February 2014