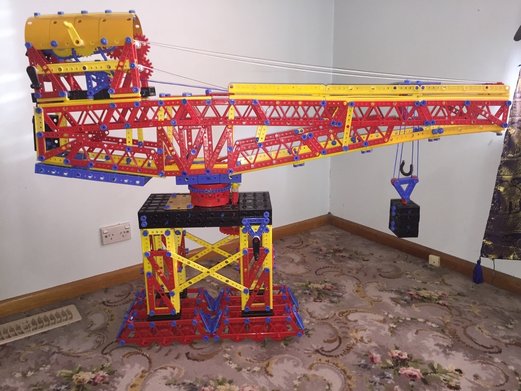 In 1929 Meccano Magazine published plans for what it called "Super Model Number 4", a Giant Block Setting Crane, described at that time as the largest Meccano model ever. It subsequently featured on the covers of many Meccano manuals although few children would ever get the chance to build such a huge model. It has however inspired generations of adult Meccano hobbyists to build this massive model.

​In this model I have constructed a roller bearing turntable using two large flanged discs and about 18 pulleys as the bearings. To rotate the turntable I have secured a length of chain to the top disc with some pieces of cotton which engages with a small chain wheel driven via a worm gear.
Yet again I have recycled the worm and bevel gear assembly from my fork-lift truck model to drive counter-rotating shafts to pull the trolley in both directions.
Built : June 2017