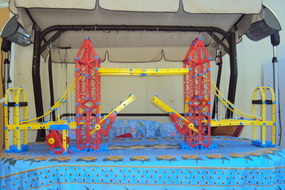 I first thought to build a model of Tower Bridge back in 2010, having just come back from a visit to London. But somehow it proved more challenging than expected to get this model built. Getting the correct proportions without running out of parts was tricky. I've finally succeeded in completing a design that I am satisfied with.

Technical Tips
The road bridge is raised and lowered by string from a simple winding mechanism. The string passes between the bases of the bridge towers. In order to hold the weight of the road bridge in the raised position a worm gear is used that prevents the winding gear unwinding in an          uncontrolled fashion.
Built : March 2013