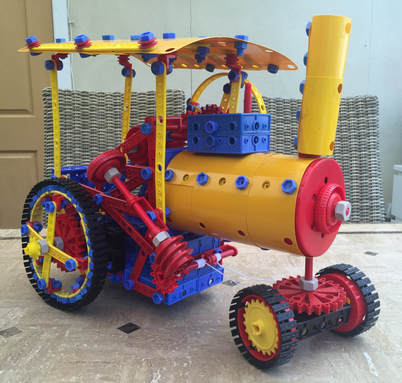 Steam driven Traction Engines appeared in the latter half of the nineteenth century and were a familiar sight on farms or on road construction until the 1950's by which time the lighter and more efficient internal combustion engine had proved its dominance. These days traction engines are still a popular attraction at steam fairs.

​This model began with my experimenting with making a completely enclosed cylinder (How to do up the last bolts ?) followed by more tinkering which resulted in the large wheels using the caterpillar track which is tied tightly to the wheel using strong thread. Other essential elements of a traction engine are the large fly wheel (In this model driven from the rear left-hand wheel shaft) and the worm gear driven  steering (Which makes steering painfully slow !).
Built : August 2017