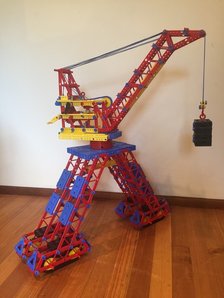 This is a model of the type of crane commonly found in docks particularly prior to the advent of shipping containers. Commonly on rails to allow the crane to move along the dockside, I have decided to use caterpillar tracks to enable it to move.

The winding mechanism to raise and lower the jib I have re-used with some improvements from the Forklift Truck I made previously.
​
These types of cranes are often known as "level-luffing" cranes because they are designed so that the jib can move in and out and move the load laterally (Luffing) but the height of the load remains unchanged. I'd have to pay more attention to the exact geometry to get that to work in this model. Perhaps a project for the future.
Built : May 2017